Film 911
Get Film 911 Updates
We promise to keep your email safe
Belly ButtonView All
Ethan is now on OnlyFans. Subscribe now at https://onlyfans.com/ethanbirch___ 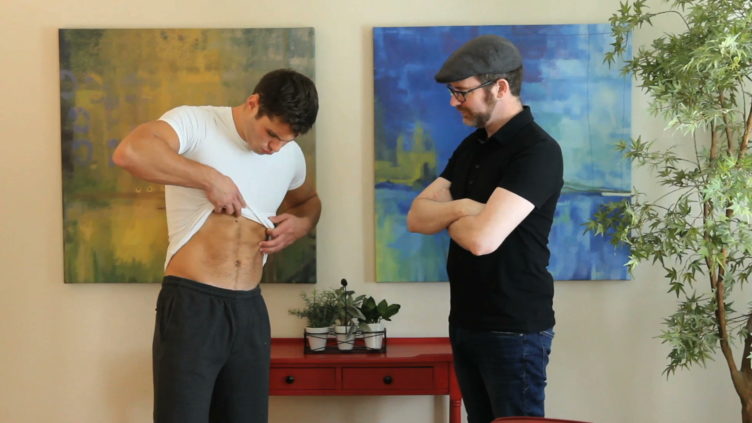 This is a custom video and some changes/additions have been made to the script below. Brad changes his underwear on camera but his junk is out of view. You can purchase the flag underwear he wore by e-mailing us at contact@film911.net if you are interested.

You are hanging out with Brad and he mentions that his love life is kind of slow. He’s really confident/cocky about how hot he is, and he doesn’t get what the problem is. You tell him it’s because he wears such unsexy underwear. You know he wears boxers but he should really wear briefs if he wants to get lucky with the ladies. You give him a pair of briefs to try on but he says there’s no way he’s wearing briefs and that he’s totally a boxers man. (I’d really like to hear Brad say the word “briefs” when refusing.)

You hypnotize Brad with your necklace (he resists a little at first) and make him strip down to his boxers. You order him to take the briefs and change into them. (He can do this off camera.) He says “yes sir” whenever he obeys a command. You admire his body in the briefs a bit and then wake him up. He’s embarrassed/confused/upset and quickly puts on his pants and shirt. You ask him if he likes his new underwear and he insists that he does not like wearing briefs as he uncomfortably adjusts his crotch through his pants. You put him under again and make him do a sexy stripper dance. He strip dances his way back down to his briefs. After dancing, make him flex his muscles for you. While he does various muscle flexes, you worship and caress his body, including his chest, nipples, abs, back, arms, face, and hair.

You then have him sit on the couch with his legs spread apart really wide. You tell him that there’s a hot girl sitting next to him and that she loves his briefs. You make him talk sexy about his briefs to the imaginary girl (like “yeah girl, you love how fucking sexy I look in these tight-ass briefs”) while he touches and adjusts the briefs. After a bit, have him stand back up.

While he is still under you tell him he now loves to wear briefs, and you give him a few triggers:

1. When you say the word “sexy” he will put his hands behind his head and gyrate his hips for 5 seconds but not realize he did it.

2. When you say the word “muscles” he will bounce his pecs for 5 seconds (if he can’t pec bounce, then just have him flex for 5 seconds) but not realize he did it.

3. When you ask him if he will ever wear boxers again he will say that he’s totally a “briefs man” now.

You then wake him up and he acts like all is normal (even though he’s still just in his briefs). You ask him how the briefs feel and he rubs his crotch and says that he didn’t think he would like them but the briefs actually feel great. He turns around 360 to give you a full view while he goes on about how amazing the briefs feel and how hot he looks in them. You chat with him for a little bit and use all of the triggers a couple times. Brad says he’s sure he’s going to get to fuck so many hot chicks now that he wears briefs. However, you tell him that the briefs will only keep the ladies interested once they’re in the bedroom. He needs something else to grab their attention up front. You pull out a speedo for him.

He doesn’t want to have anything to do with the speedo. He says he may be a briefs man now, but wearing a speedo out in public is not happening. His surfing buddies would never let him hear the end of it. You try to convince him that he’ll get all sorts of attention at the beach in his speedo, but he refuses. You put him under, and command him to take the speedo and go change into it. Brad returns in the speedo and hands you the briefs he just changed out of.

You snap him out of it and he’s not happy that he’s in the speedo. He asks you for his briefs back, but you try to convince him the speedo is great. While you talk with him you use the “sexy” and “muscles” triggers from earlier a couple times each. You then put him under again and tell him when he wakes up he’s going to think he’s at the beach in his speedo. He’s out for a run (you can just have him run in place) and he comes upon a hot girl with her boyfriend, but she’s totally checking out Brad in his speedo. You tell Brad to flirt with the girl and tell her how much hotter he looks in his speedo compared to her boyfriend in his boring baggy boardshorts. You wake up Brad and he plays out the scenario. When talking to the imaginary girl, he poses a little to show off his body in his speedo and says that a girl as hot as her belongs with a “speedo stud” like himself. Brad gets the girl, and as he leaves with her he makes fun of her ex-boyfriend and his boardshorts.

You put Brad under one more time and tell him that he loves wearing the speedo and will always wear it at the beach. You also give him one more trigger: When you ask him if he will ever wear boardshorts again, he will say he’s totally a “speedo stud” now.

You wake him up and talk to him about the speedo he’s wearing. He thinks it’s great and he’s so hot in it that he’ll be able to get any girl he wants at the beach, even if she has a boyfriend. He thinks his buddies will be so jealous of him that they’ll want to wear speedos too. You agree and tell him that he can send his friends to you if they want any help. During this conversation you use the new trigger a couple times as well as the “sexy” and “muscles” triggers a couple times each. Brad then puts on his pants and shirt and says he’s gonna go to the beach right now to get some action with the help of his new speedo. He confidently grabs his crotch through his pants. You wish him luck and tell him not to forget his briefs. He thanks you for reminding him, takes the briefs from you, and stuffs them into his pocket as he happily heads out the door.

If you are still having trouble purchasing this video, please e-mail us at contact@film911.net.

Please note we are only offering a download of this video, not streaming. No refunds.